The Hunted One Book Summary

Will this growly protector break her book-loving heart . . . or become her second chance at love? Savanna Vasquez lost her Navy SEAL husband years ago to terrorists, and she doesn't think she's capable of falling in love again. So, she busies herself by running her café and buries her face in the pages of fiction for a romantic escape. But when her late husband's brother finds his way into her life, bringing a world of danger with him, Savanna is protected by a group of tough former Army guys. She feels like she's inside one of her favorite novels, but she's not so sure if her happily-ever-after will be guaranteed, especially when she finds herself alone with one of the dangerously handsome Delta operators. After twenty years of serving his country in the Army, Griffin Andrews now works for an elite security team. When he's sent on a mission to protect a friend of the firm, he never expects to meet a woman who will bring his dead heart back to life. In Griffin's eyes, Savanna's still married, even if only in her heart--which means she's off-limits. Forget the fact she's also his assignment. With her being hunted by an unknown number of threats, he needs to focus on her safety and not the way she feels in his arms. Griffin's resolve begins to slip the more time they spend together and his self-control snaps. The unexplainable connection between them has them both wondering if maybe they were brought together for another reason. And as Griffin does everything in his power to save Savanna, he discovers there's a chance she just might save him too. From Wall Street Journal bestselling author, Brittney Sahin, comes a thrilling new series, full of sizzle and suspense. The Falcon Falls Security team will take you on exciting adventures around the globe as the heroes fall in love in these standalone romance military novels.

Will this growly protector break her book-loving heart . . . or become her second chance at love? Savanna Vasquez lost her Navy SEAL husband years ago to terrorists, and she doesn't think she's capable of falling in love again. So, she busies herself by running her café and buries her face in ...

Fallen angels have trespassed into Heaven for the first time in eternity. Prepared for battle, Heaven’s General and the most powerful Archangel, Michaela, opens Heaven’s gates to confront the fallen. In Purgatory, it’s not a battle she finds, but a betrayal of the worst kind. One simple ...

In this epic fantasy adventure, a teen girl embarks on a quest to apprehend her father’s killer and finds magic, intrigue, and herself along the way. Seventeen year-old Britta Flannery is at ease only in the woods with her dagger and bow. She spends her days tracking criminals alongside ...

Where does the adventure end . . . and the nightmare begin? Frank owns a service station on a little-used highway. His granddaughter, Allie, is sent to stay with him for the summer, but they don't talk a lot. Simon is a dreamer and an idealist, in thrall to the romance of the ...

Newbery Medal-winning author Matt de la Peña’s The Hunted, the sequel to The Living, is a high-energy, action-packed survival story. “De la Peña has created a rare thing: a plot-driven YA with characters worthy of a John Green novel.” —Entertainment Weekly on The Living, A- For those ...

"The Beach meets The Woman in Cabin 10 in this twisty new thriller about two couples who meet backpacking through Africa, but what begins as friendship quickly turns to obsession, with deadly consequences—from bestselling author Roz Nay."--...

Indulge in the temptation in the breakout series The Hunted by Ivy Smoak. When Penny Taylor runs into a handsome stranger in a coffee shop, she believes her luck has finally changed. After having her confidence unwound by her ex, she falls hard for a true gentleman. But once she ...

An exhilarating adventure into a realm of mythology, dark fantasy, foreboding creatures, and magic. When wind nymph Kaitaini fails to protect her sister from Zeus she vows to do the impossible: kill an immortal. The hunt has begun.... 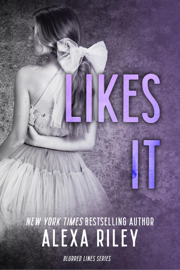 Likes It
by Alexa Riley